GET YOUR FREE QUOTE HERE! 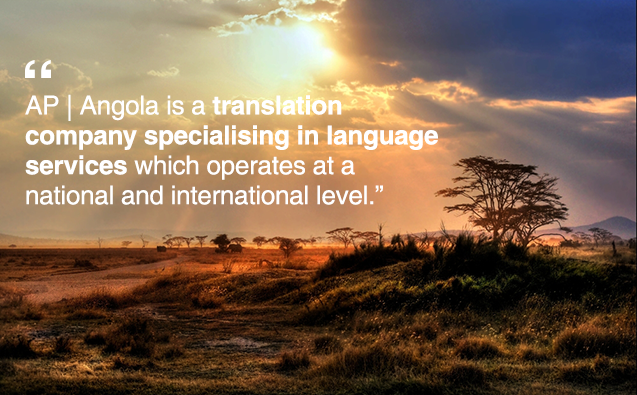 AP | ANGOLA - Language Services belongs to the AP | LANGUAGE SERVICES group and was specially created to perform translations from and to the African varieties of Portuguese. This is because, despite the unification of the Portuguese language, the particularities of it used in Angola remain. That is why the jobs of AP | ANGOLA are completed in Angola and by experienced native professionals.
Browse our site and know more about our services at your disposal. We are happy to offer this new channel with the same quality and excellence of our projects in other countries
AP | ANGOLA is a translation company specialised in language services which operates at a national and international level.

A) Cookies are small text files with distinct information that is stored on the User's hard disk by accessing a web page or Internet portal and that are sent to the web server in the following connection to the server.

B) AP | PORTUGAL may use cookies on its Website. The information collected will only refer to the pages of the Site that the User has browsed. The purpose is statistical, as well as to get to know the tastes and preferences of the users of the Website. If you have configured your browser in a way that prevents the creation of cookies or that warns you of this fact, this will not prevent the User from accessing the website but may impede the correct operation of it.